Our New Logo As We Move Ahead

When we changed the Credit Union name several years ago to better identify the makeup of our membership and look to where our future members would come from, we still incorporated the New York City skyline into the new logo. With the tragic events of 9–11, the skyline, as many of us knew it, would be forever changed. At the time, debate continued over whose design would someday rise in the place of the “Towers.” Greater Metro couldn’t really wait for the years (twelve) to pass before a logo could be finalized so we included the “Towers” and distinguished them from the rest of the city as “Shadows.” 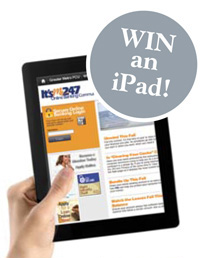 We knew that we would have to re–address this at some point. As the spire was placed atop the Freedom Tower, now called One World Trade Center, a few months ago, we decided that the time had come.

Proposed proofs and numerous discussions took place on the logo change. Replacing the “Shadows” with 1 WTC in the skyline was an option and future depictions of the skyline will most likely only show the new Tower. Since our Credit Union’s inception is chronologically tied to that of the Twin Towers, we tried to tie them into the new logo. We all acknowledge that we must “Move Ahead,” and 1 WTC stands as that symbol. But we also have an opportunity to “Remember,” and incorporating the “Shadows” could be our tribute.

It was decided to let the members of this cooperative help choose the new logo. 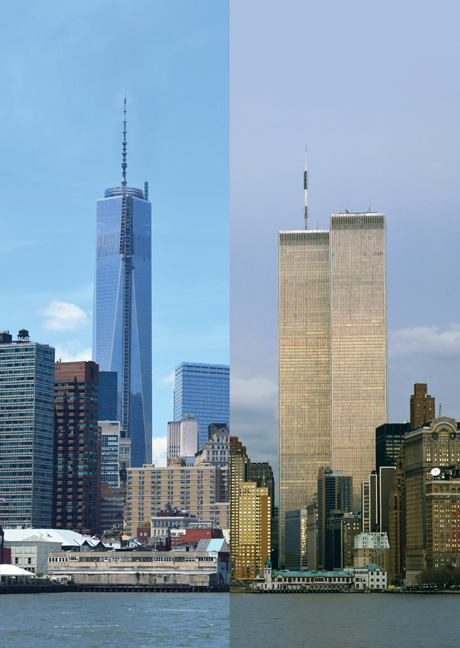 After many years of dedicated service as the President and CEO and many more as a Director of the Board, Robert Ambrose delivered his resignation to the Credit Union. Many of the services that members enjoy today were initiated by him. The move from Manhattan to the building in Queens Plaza, the incorporation of VAROH FCU into IBM Metro, as well as the introduction of a new core processor and online banking system were among many of the initiatives that Bob oversaw to a successful end. His expertise and knowledge of the Credit Union industry will surely be missed. His dedicated service to IBM/Greater Metro will be missed even more. Everyone at Greater Metro thanks him for his service and wishes him all the best!

Rosemarie Stoffo was appointed to fill the seat of Bob Ambrose until the next election, which will take place at the 2014 Annual Meeting.

Over the years, many of our members have taken advantage of low–cost Accidental Death & Dismemberment insurance coverage through our partnership with the Affinion Group. There’s been a basic component that the Credit Union pays for, and then members could supplement that coverage. The Hartford is the actual insurer.

Due to legislation and some court decisions passed in New York State, many insurers cannot market new policies. Existing policies are benefitting by rates being held at below market.

The Credit Union is looking at a few other companies to offer the product to our currently uninsured members; however, we must wade through some contractual waters before moving ahead.

Remember these? Back in the day, everyone purchased them when travelling. Today, debit or credit cards cover just about everything.

Years ago, we entered into an arrangement with American Express to offer Traveler’s Cheques to our members at no cost, however, the cost to the Credit Union to administer the program has increased. Weighing the cost versus the benefit/usage, Greater Metro will no longer offer the product after October 31, 2013. 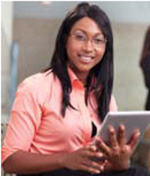 In our Summer Newsletter we noted that a change would take place with regards to viewing MasterCard statements online beginning August 12, 2013. The date was then pushed back by our processor to September 17, 2013.

We hope that most users of the service weren’t terribly inconvenienced, as members were required to reset their profiles.

The reason for the change wasn’t to annoy anyone, but rather to upgrade the operating system as the old platform would no longer be supported. The newer platform would allow for future upgrades.

The hours at the Manhattan Campus have been shortened. Teller Service is currently available from 8:30 a.m. to 4 p.m. on Monday, Wednesday and Friday.

Well, it’s that time again. In 2014, there will be two seats on the Board whose terms will be expiring.

At the September 26, 2013 Board of Directors meeting, the Chairman, Robert Morrison appointed a Nominating Committee to collect and review applications from members interested in being nominated for those two positions.

Members 18 years and older who are interested in volunteering their time to serve the Credit Union membership, may submit their application (letter of interest) along with a resume to the Nominating Committee for consideration. 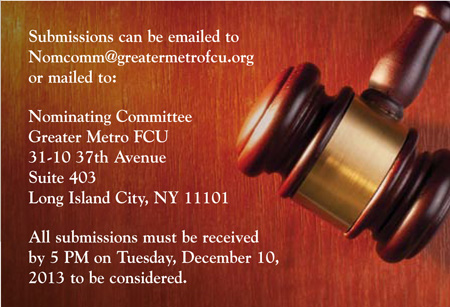 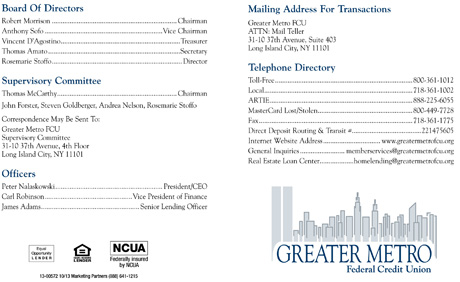